Exposing HUDDAH MONROE Separating The Truths From Lies,Beef With PREZZO -
Skip to content

PART ON OF OUR TRENDING
Huddah goes bizarre slashing at Prezzo for being a broke living at his mothers place. Trouble started on the instagram where Huddah jumped on Prezzo’s photo and posted a slashing comment which by the way she deleted over unknown reasons but we got hold of it 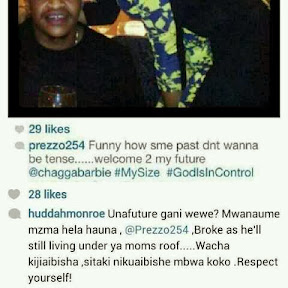 This comment sparked a trend because according to Huddah,Prezzo is dead broke. However,for every story there are two sides of the coin,it was all good Weeks ago,everybody knew Huddah and Prezzo were going out together even though they both didn’t admit it publicly. Nairobi Exposed as usual,went behind scenes to unearth the motive of rage exhibited by the lady,a jilted lover? All the signs proved this but evidence is critical.

First the trouble and cold war has been brewing in the instagram streets which is not popular with many that’s why a lot went unnoticed. Prezzo has a new Tanzanian girlfriend,Chagga and she has been confessing and the two getting all lovey dovey and this didn’t get well with Huddah I suppose. As NE establishes,Huddah formed an army with certain ladies both from Tanzania and Kenya where they attacked Prezzo’s girlfriend by calling her names in fact here is a congratulatory message to the troop for a job well done. 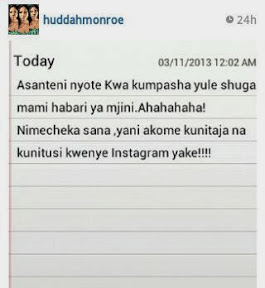 See also  Murang'a Lady Badly Embarasses Her Husband For Not Satisfying Her In Bed (PHOTOs).

Sugar mummy to insinuate that she was too old for Prezzo but is that true? Let the pictures tell 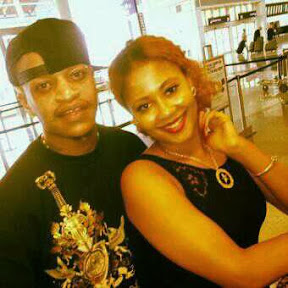 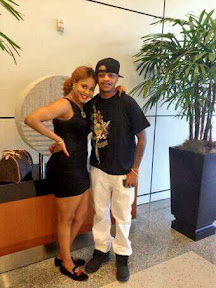 Chagga and Prezzo on the other side seemed to have resorted to ignoring her but it was until Prezzo posted this photo sending subliminal message to Huddah for refusing to move on,and that’s when Huddah stung 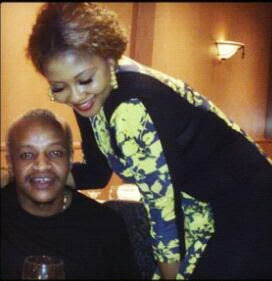 But as you are about to find out,this marked the start of a war,Prezzo himself didn’t reply and dodged Huddah’s bullets but the girlfriend was off gloves.

As a way of making the lady jealous or proving out a point,Huddah posted a photo saying Prezzo is still chasing her 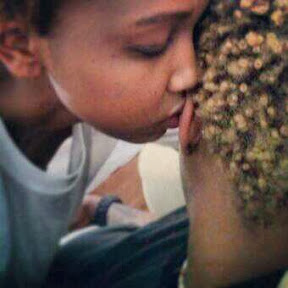 She was instantly given a reply from the new girlfriend 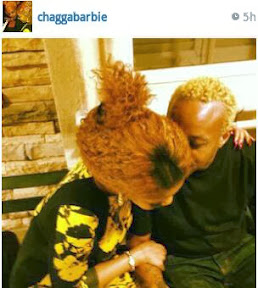 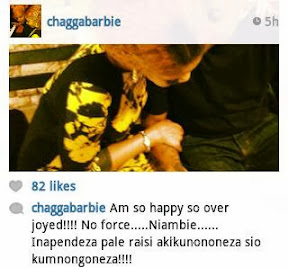 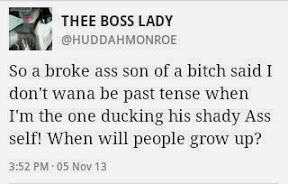 And back on instagram,she gave a clear hint of what was motivating her through all these,perhaps… Notice what’s on her right hand 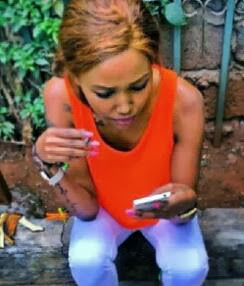 As Prezzo was trending for all the broke reasons Huddah went on her instagram again where she has a good following, posting photos of her supposedly now a gold dealer,a step to make people believe he was up to making money after all Prezzo was supposedly broke. Notice the captions 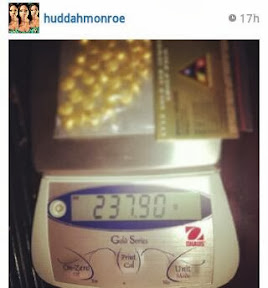 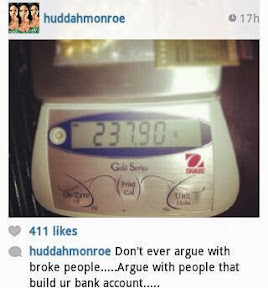 However,what she failed to tell her followers was that,there wasn’t any business she was back on and if any then it was for posting archived photos she took during her days with Prezzo and she was busted by none other than Prezzo’s new girl.

Notice she has the same exact photos Huddah claims to be back on business,also you’ll realise Huddah’s photo was a bit blurred and this is clear with a different view angle,she didn’t hesitate to slam at Huddah at the same time. 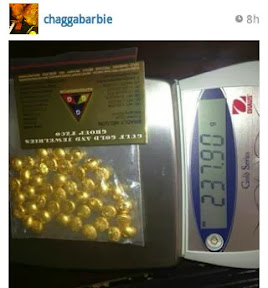 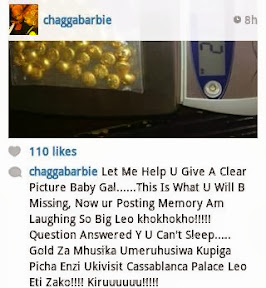 Huddah posted yet another photo 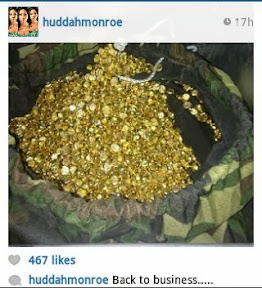 Ironically,Chagga had the same photo and her reply 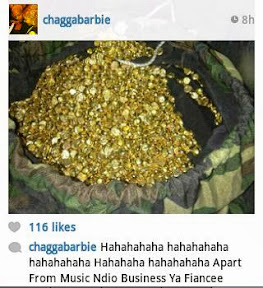 This opened another secret unknown to many that Prezzo apart from music deals with jewelery as part of his business entity. However on the other side,Huddah was still on her business,posting more photos of the new cargo,lol.

See also  Thirty Men Banged Me On one Night, I was Introduced To a New CultI was 20 years old and I lived with my parents at a council flat in Meru County. 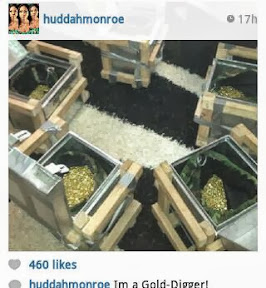 But wait boy,Huddah had finished transacting and even had a photo to show the aftermath loot 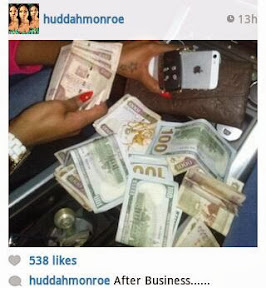 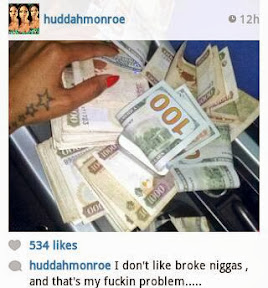 Talking of pictures,here is something I also found rather interesting. Days back Huddah posted how she scooped herself a billionaire and supposedly bought her a Chevy 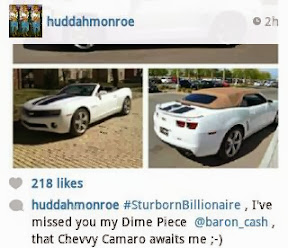 Snooped around and found this on the supposed man,notice the photo is the same with what Huddah posted and then read the caption,keeping in mind Huddah’s too 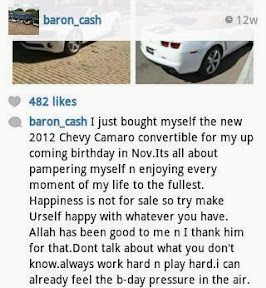 Talking of which,yes the man is a Ghanian and super rich but also has a girlfriend,a doctor to be precise 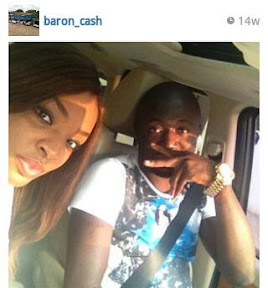 Anyway that was just a btw,the main question is,do you trust Huddah’s word that Prezzo is broke and by her saying she doesn’t f with broke nggas but had been going out with the supposedly broke fella does it make sense?

Ladies and gentlemen there you have the simple facts,and this is just part I.

“Am an atheist we don’t do that holy sh*t” – Octopizzo Says He Doesn’t Believe In God.

Henry Ohanga better known as Octopizzo has openly denied the existence of God. Taking to Twitter to answer a fan over the debate concerning the Kenyan artists who had visited DP Ruto, Octo said that he doesn’t believe in God neither does he share the theory of his existence. Octopizzo’s reaction came after the fan […]

“Murathe has not resigned as the vice-chairperson”- Jubilee Party Dismisses Claims.

After a week of huge speculations and fans waiting for the unveiling of a new female news anchor, Inooro TV has finally revealed the identity of the lady. The identity was first shared by Ken Wakuraya who seemed overjoyed to finally get a companion in anchoring.Taking to his Facebook page, Ken welcomed famed journalist identified […]

See the man that RUTO may have settled on as his 2022 running mate, Will tear UDA into pieces

How To Check NHIF Balance Via SMS

Llewellyn Ouya: How Content Creator Made Ksh400,000 From Tik Tok