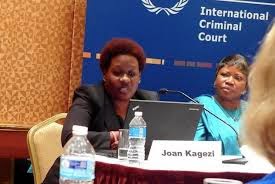 Joan Kagezi, acting assistant director of public prosecution, was murdered by men on a motorbike as she drove home in a suburb of the capital, Kampala police spokesman Patrick Onyango said. “They were trailing her on a motorcycle…. They shot her dead.”
Her current cases included the trial of men allegedly linked to July 2010 suicide bombings targeting football fans watching the World Cup final at a restaurant and a rugby club in Kampala.
Somalia’s Al-Qaeda-affiliated Shabaab militants claimed responsibility for the attack, the group’s first outside Somalia.
The trial of the accused — seven Kenyans, five Ugandans and one Tanzanian — began earlier this month at Uganda’s High Court on a range of charges including terrorism, murder and membership of a terrorist organisation.
All but one have also been charged with belonging to the Shabaab. The case was due to resume on Tuesday. 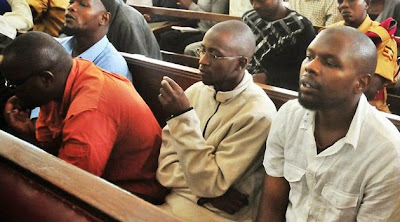 Some of 12 suspected Al-Shabaab-linked terrorists appear in a court on November 15, 2011, to face charges in connection with a twin-terrorist attack in July 2010 that killed at least 76 people in Kampala, Uganda
Jane Kajuga, spokeswoman for the office of the director of public prosecution, confirmed the death of Kagezi, lead prosector in the bombing trial, and who also led the prosecution’s anti-terrorism and war crimes section.
“She has been shot dead… but details are so far scanty,” Kajuga told the NTV Uganda station.
The state-owned New Vision newspaper said the gunmen had attacked her car as it slowed down for speed bumps, and that the lawyer died on the spot.
The July 2010 bombings were one of the deadliest attacks by the Shebab, who also carried out the 2013 assault on the Westgate Mall in Nairobi, Kenya, killing at least 67 people.
Uganda and Kenya have contributed thousands of soldiers to the African Union Mission in Somalia (AMISOM), which was established to fight the Islamists and protect the internationally recognised government.
Al-Shabaab continues to target countries in the region.
In September Ugandan security forces seized suicide vests and explosives during a raid on a suspected Shabaab cell in Kampala.
Last week Uganda said it was boosting security over threats by the Shabaab, after the US embassy in Kampala warned its citizens of a possible imminent terror attack.

“May God punish you”- Pastor Curses Her Church Members For Not Contributing Money For Her Birthday (Video).

A video doing rounds on social media has caused a buzz after a female preacher cursed he congregants who never contributed money to her birthday party or even wish her well. The preacher who has since been identified as Pastor Cecilia, told her congregants that God will surely purnish them for being very selfish. The […]

I will not apologize, unfollow me if you want- Muthoni Wa Mukiri.

Muthoni Wa Mukiri has now said that she will not apologize for mocking Deputy President William Ruto. The former Inooro TV News Anchor taking to facebook said that she will never issue an apology for making a personal opinion adding that she might join politics soon. As earlier reported by Murang’a Newspaper, the Ex-TV girl […]

Kiss 100 presenter, Jalang’o now wants the national government to declare October 26th a national holiday named after ‘Baba Gloria’ and other major blunders Kenyans have made on the social streets. Jalang’o on his morning Show with co-host, Kamene stated that Kenya should have a public holiday to celebrate Kenyans who have accidentally sent inappropriate […]

“Mpee tu kidogo” – Ringtone Asked To Act On Justina Syokau’s Feeling Towards Him.

Skinny man parades 17 different ladies that he has chewed – He must be a tiger in bed or is HE stupid ? (PHOTOs).

PHOTOs from XS Millionaire strip Club that will make some parents collapse – Do you know what your daughters are doing in Nairobi?

Hilarious,Headteacher Caught in the Act with a Parent in the School Library