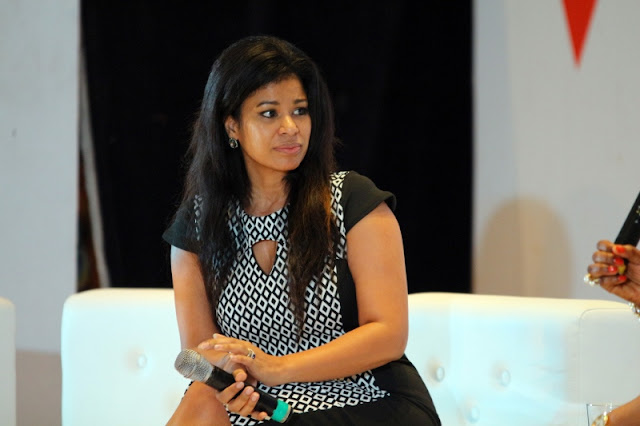 Former television host Julie Gichuru has been trending online after she made a call for peace during the forthcoming general elections.

Her one minute video posted online sought to explain that peace leads to justice being served while conflict and violence leads to more injustice.
Julie’s video had been captioned “Don’t let pseudo intellectuals lie that one can seek justice via violence.”
The caption was interpreted to have been in reference to economist David Ndii’s earlier tweet on the country burning if the elections are a sham.

Julie’s video was retweeted hundreds of times and attracted over 200 comments.

Don’t let pseudo intellectuals lie that one can seek justice via violence. Conflict is the mother of injustice & she breeds a multitude.

However, in their comments, some users lashed at the former TV host for insinuating that people should settle for lack of credible elections just for peace to prevail.

I disagree. Mau Mau didn’t use psalms. They used violence. As the language of the voicelessness. Even our flag has the symbols!
— Real Peasant.© (@kenyanpeasant) July 5, 2017

Never again shall we be fooled with clarion calls for peace. To have it or not, is all on @IEBCKenya. U shld be asking 4 credible elections
— Romana (@Thumbelinarh) July 5, 2017

Purveyors of injustice and their enablers better be warned; peace is an outcome not an act. Justice is an act.

Julie went on to clear the air on her sentiments tweeting:

Don’t care what you think of me, bt I’ve seen the result of war, wld not wish it on you/your loved ones. Ever.
Don’t wish it upon yourself.
— Julie Gichuru (@JulieGichuru) July 5, 2017

Peace is a gift.
Do not be the fool that scorns it.
To seek redress for injustice, you don’t multiply injustices.
Don’t bleed for politics.

I see you fighting back hard.
Peace is a gift.
I believe in justice & in non violent action in the event of grievances #Peace
— Julie Gichuru (@JulieGichuru) July 6, 2017

As long as BAD leaders & self-serving opinion leaders try to normalise conflict and violence, I will speak to the importance of peace.

I feel you. But don’t be cheated.
We ALL want free & fair elections.
We ALL do.
If anyone thinks there are issues, nonviolent action is key.
— Julie Gichuru (@JulieGichuru) July 6, 2017

The discussion led to a top trend in Julie’s full name as users weighed in:

Hey Julie Gichuru, can we download peace from the portal too?

If only Julie Gichuru was as outspoken against corruption as she is about perceived incitement.
— Mr. H (@githaka_) July 5, 2017

They criticize Julie Gichuru for being a peace advocate, Nasa supporters think that elections are only credible if Raila wins, smh

KIBAKI’s elder sister, who lives in poverty despite her late brother being a billionaire – Kibaki was mean?.

The late President Mwai Kibaki has an elder sister by the name Waitherero who lives a humble life with her children, contrary to what one would expect. Waitherero actually resides in a wood house notwithstanding the power and honor that her late brother wieleded. Her photographs surfaced online after Kibaki was buried and ignited responses […]

A Form one student in Bonchari Constituency, Kisii County on Wednesday, August 4, attempted suicide after failing to raise school fees money. The girl identified as Janet Otwori was expecting to join Kereri Girls High school in Kisii is said to have drank pesticide after failing to get admitted to the school. Joseph Onduso, her […]

Drama In Kiambu As Man Is Buried ‘Like A Dog’ After Allegedly Killing His Brother Over Inheritance.

There was drama in Githunguri after a man was buried in the most bizarre way after he allegedly killed his blood brother over inheritance. It is reported that the killef his brother and went into hiding and upon search the body later found in the Mortuary. The man identified as Kariuki killed his brother after […]

Mr. Kilunda: Where is Ex-Tahidi actor after TV Show ended?

Leonard Mambo Mbotela: Do You Still Remember him ? What Happened to Him.

Muhoho Kenyatta: The man who runs the Kenyatta family empire

Ken Mijungu: friends,Family who want my money, but never supported my hustle

Pastor T Mwangi :  It is Evil for Christians to Have Tattoos or Piercings.